Cavendish comes to the Trades Hall

From the moment I wrote the script I knew that without the right location there would be no film. 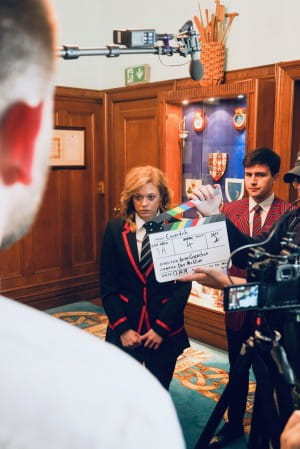 Cavendish is a Scottish boarding school set in vast acreage with wood panel interiors, high ceilings and all the charm expected of a traditional, lovingly maintained historic building. Originally written as a few lines of dialogue for my show reel to showcase a critical age and emotional range to casting directors, Cavendish expanded into two scenes, casting two more actors and hiring seven members of crew. By the time I emptied my head of all the dialogue that needed to be spoken between Coach Maclay, Gracie Bennett and Phinneaus Brock, it felt more like a short film, and so we treated it as such.

The first scene takes places in the football coach’s study (Coach Maclay played by Robert Carr), where he sits in wait at an 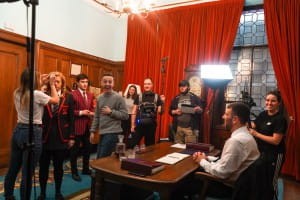 imposing desk for Deputy Head Boy, Phin (played by Dom Fraser) to bring temperamental footballer and new girl at Cavendish, Gracie Bennett (played by Maddy Bryce) in for a serious conversation following an altercation on the pitch. Maclay’s study had to evoke feelings of generations upon generations of pupils who went before Gracie; the countless conversations and what those wood-panelled walls must have seen and heard from their doors opening in 1754 until the present. It had to breathe tradition and betray the year, because the entire scene is Gracie coming against what Cavendish stands for by criticising what they stand for. We found every single detail to evoke those emotions in the Trades Hall in Glasgow. Every detail, every photos and shield and crest in gilded frames were so utterly perfect that we didn’t have to add any of our own props.

If you read the script and then walk into the rooms we used, you feel as if you stepped off the page and into Cavendish School. 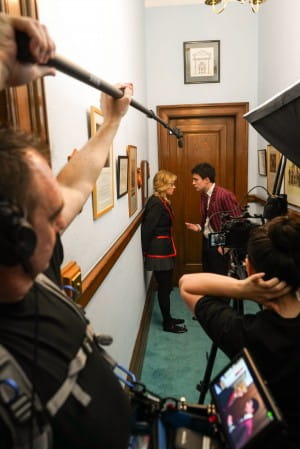 Director, Arron Greechan, had the same sentiment. “During the filming day, the buzz around the building was palpable. This is inspiring and adds to your vision for the day. Your duty as a director becomes about serving the building justice, as much as the script. The location was providing shots that we would not have considered before, nor would we have shot in any other location. The building was pure magic for the camera.”

Cinematographer Dee McGloin has shot in many a stunning and interesting location and I couldn’t wait to let her have this one. Not that anything could have topped being able to shoot in the perfect setting, but we were glad to have added professional photographer Iain Gallacher to the crew to capture behind the scenes moments and pose the actors not just in the suite, but on the staircase and adjoining main hall for official photographs going on IMDB and social media.

To view more stills and behind the scenes shots of Cavendish, click here. 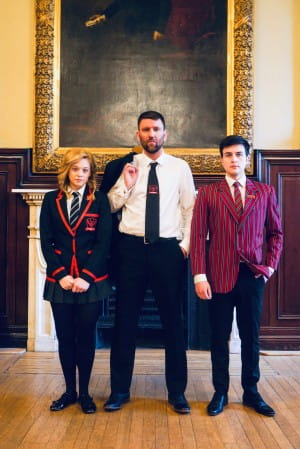