Cavendish Returns to the Trades Hall

The moment Cavendish (now known as Cavendish episode one) wrapped, there was an underlying sense between the cast and crew that we were walking away from something that still had more life in it. It felt a bit of an injustice not to continue Cavendish, especially given our strong team bond and passion for storytelling. What was more, knowing the interior of the Trades Hall has several different rooms, and having lovingly adopted the interior of the Trades Hall as ‘ours’, we knew there were many more episodes that could take place within these walls. Location is everything and the Trades Hall has been an incredible partner on this journey. 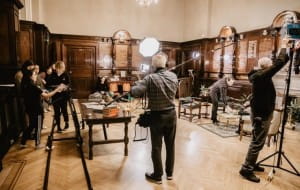 There was never a clear line between episode one wrapping and episode two beginning because the passion and thirst never faded. The cast and crew naturally walked into episode two before even fully understanding what it might become; all we knew was that there was more.

Cavendish is currently the only crowd-funded, independent web series in Scotland. Writer and producer, Maddy Bryce (who also plays Gracie Bennett), wrote another script and organised the crowdfunding. Without her, none of this would be possible. The three-month period between shoots led to a natural turnaround of crew, with AD Lauren Boal stepping up from 1st AD on the first episode to director for the second, and additional members recruited to share the expanding workload.

Episode two of Cavendish picks up right where we left the audience - with troublemaker Gracie Bennett being led by Phinneaus down a hallway to report to the Head Boy. Director Lauren Boal said of the room chosen for the next scene, “We used the Saloon Room to be Alexander’s study. With its lavish wood paneled walls and beautiful stained-glass windows it was ideal because of how seamlessly it blends with episode 1. With the grand piano in the background, a long table transformed into an imposing desk, perfectly prop-like green leather chairs, and a marbled fireplace for the centre of the conversation between Gracie, it created another perfect setting. We couldn’t imagine the interior shots being anywhere else. We were also able to have our team meals in the grand hall, which is stunning with it’s over sized oil paintings and high ceilings. And who doesn’t love having a slice of red velvet cake underneath a grand, gold chandelier?” 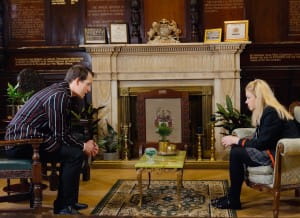 Dee McGloin, Director of Photography for Cavendish has one of the most important perspectives because she is capturing every moment of both the actors and the environment frame by frame. “The rich mahogany wood panels that line the room, brought to life with producer Maddy Bryce’s set design and the red highlights of the Cavendish school uniform created an unbelievable colour palette. We were able to marry all these concepts to emphasise exactly what Cavendish is all about: unity and harmony. Thanks to our incredibly professional actors, we achieved all necessary shots in record time and wrapped early; allowing cast and crew to head home for an early night before our second day of shooting outdoor in Ayr.”

As excitement online rises for the premiere of episode two, the whole Cavendish cast and crew would again like to extend thanks to the Trades Hall and their wonderful staff. The script for episode 3 is nearly finished and once we secure funding, we will undoubtedly be back to shoot the next installment.

(Cavendish now has a website and is always looking for sponsors/funding!)