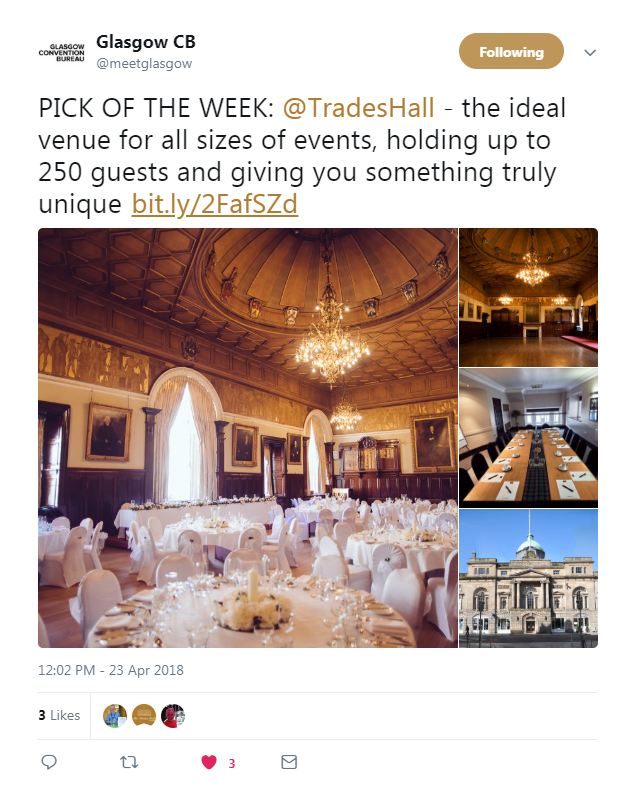 We were thrilled to be recently chosen as Glasgow Convention Bureau's 'Pick of the Week: The Trades Hall of Glasgow, historic venue which has moved with the times'.

You may know that Glasgow’s medieval Cathedral is the city’s oldest building still used for its original purpose, but did you realise that Trades Hall is its second oldest? It was built to house the Trades House of Glasgow and its 14 Incorporated Crafts, which offered support to the trades people of the city and their families during times of poverty, hardship or illness. It was also home to the Trades Free School for many years until the Education Act came into force in 1872 making primary education universal and mandatory in Scotland.

It has, however, moved with the times and is now enjoyed by thousands of people every year as a social programme venue for conference clients.

Trades Hall is the ideal location for all sizes of event (catered and non-catered), holding up to 250 guests and giving you something truly unique. We pride ourselves in delivering a high quality experience, unrivalled customer service and the ability to work with all our customers’ varied requirements.

For example, we played host to Team South Africa during the Glasgow 2014 Commonwealth games when Trades Hall acted as their entertainment and hospitality hub. We obviously can also cater for standard industry conferences down to smaller team meetings and workshops - we really can do it all. Located in Glasgow’s Merchant City and with excellent travel links, Trades Hall has recently been refurbished with state of the art air-conditioning and architectural lighting to ensure you and your guests experience maximum comfort.

There are six unique function rooms that can be hired individually or in any combination, with exclusive use of the building. The Grand Hall is the jewel in the crown of Trades Hall, featuring baroque chandeliers and late Victorian décor.

Visitors cannot fail to be impressed by this stunning, historic building (built by renowned Scottish architect Robert Adam), now a registered charity (SC040548) with all income arising from events held within the building therefore being used to support charitable purposes

Well practiced in hosting important events in the city, you can rest assured that Trades Hall’s experienced team will deliver the best possible day for you.